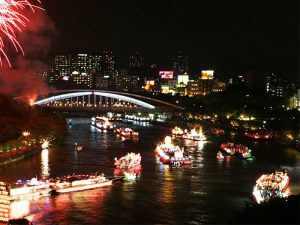 Today, I will write a blog about “Tenjin Festival” in Kansai / Osaka, which is one of the three major festivals in Japan the other day.

“Tenjin Festival” in Kansai / Osaka is a generic term for festivals held at “Tenman‐gu Shrine” throughout the country, and has a history of more than 1000 years.

Among them, the Tenjin Festival, which takes place every year from late June to July 25 in Osaka Tenman‐gu, is famous as the third major festival in Japan.

The climax will be held on July 24 ‘Yoinomiya’ and 25 ‘Honmiya’, and about 1.3 million people will visit in two days.

Particularly popular are the approximately 5000 fireworks on July 25 and about 100 large fleets of floating ships in the Okawa across the city. 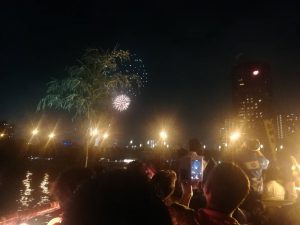 The scene in which the dynamic fireworks color the night sky and the ship’s clings swaying on the water surface is a compelling point.

When the ship and the ship pass each other, there will be a hail and a handclap called “Osaka-jime”.

When the ship and the ship pass each other, there will be a hail and a handclap called “Osaka-jime“.

In addition, on the boat, you can see the “Dragon Dance” dancing on the light ground Danji-Bayashi. As the name implies, the dragon dances to simulate the rising of the sky. Move from shoulder to finger skillfully in a forward-looking posture, and dance as if dragons and snakes curled up.

In addition, there are many stores in the riverside, and it is full of people who enjoy the festival with couples and family friends.

The Tenjin‐Festival site is very large, with two fireworks launch sites, and the street where the food stalls are very long.

The nearest station of Tenjin Festival changes according to the purpose (stands, fireworks, Funatogyo, Rikutogyo).

Enjoy the stalls of Osaka at the Tenjin-Festival! 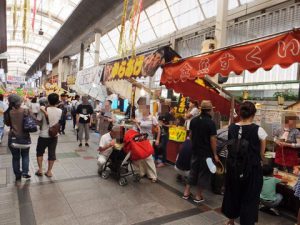 Tenjin-Festival has stalls lined up in two areas, an area along a river and “Tenjinbashisuji Shopping Street”.

Those who want to enjoy stalls only recommend the Tenjinbashisuji Shopping Street area!

The nearest station is … 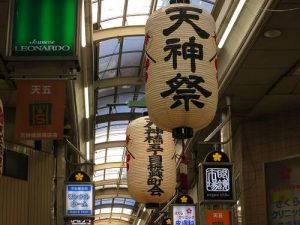 Because there are many who want to enjoy together with fireworks and Funatogyo,On the 25th, people along Okawa are crowded.

Enjoy Osaka’s food stalls and fireworks at the Tenjin-Festival!

If you want to enjoy both Osaka’s food stalls and 5,000 fireworks, you must first join the Tenjin-Festival on July 25 when fireworks are launched.

There are food stalls along the Okawa area from the north side of JR Sakuranomiya Station to the west side of Tenmabashi Station (Osaka Metro, Keihan), and the fireworks launch site is also launched at two sites: Sakuranomiya Park and Kawasaki Park. Therefore, you can enjoy stalls and fireworks from either side!

Please leave it to the flow of people and walk along Okawa.

In general, it is easy to see the fireworks beautifully in Sakuranomiya Park, and you have to walk a little from Tenmabashi Station … 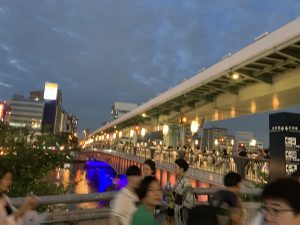 The nearest station is …

So, “Sakuranomiya Park” where the fireworks display goes up is a popular fireworks viewing area.

The nearest station to here is …

If you want to avoid the crowd, you will have to walk for about 20 minutes.

You can use the train to avoid the crowds.

Tenjin Festival’s “Funatogyo” is a large boat floating on the Okawa.

The following is the nearest station to enjoy “Funatogyo”, just like fireworks.

It is near Tenmabashi Station on the Osaka Metro Tanimachi Line that you can see the most beautifully, but it can not be viewed slowly unless you take a place two hours or more before 18:00 because it is crowded.

The Tenjin Festival in Kansai / Osaka is one of the three major festivals in Japan, so heavy traffic is inevitable.

For viewing of fireworks and Funatogyo, it is recommended to take a place two hours before Funatogyo (18:00) and Fireworks (19:30).

It is recommended that you enjoy the stall while taking a place.

The food at the stalls is honest and not delicious (please enjoy the atmosphere), so before arriving at the nearest station, buy some delicious Japanese side dishes and drinks in the underground grocery store of the Japanese department store. We recommend.

Anyway, Tenjin-Festival in Osaka will be very crowded.

Kansai is not as large as Tenjin-Festival, but there are many festivals that are loved by local people in Kansai, so why not join the Kansai Festival, which has not become a tourist destination yet?