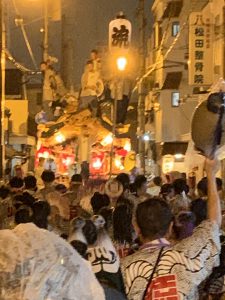 Yesterday’s Danjiri’s “9 Town Joint Towing” was a big boost, but today the largest climax of the summer festival of Kumata Shrine was held, “Miyari”!

The Kansai / Osaka largest Danjiri Festival is finally the climax.

At approximately 30 minutes from around 19 o’clock, there are nine “Danjiri” and “Miyairi” events through the Great Torii of the shrine. 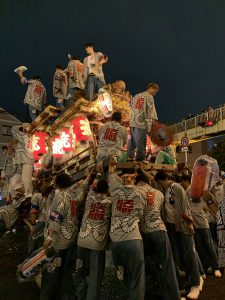 It was rainy weather from this morning, but the tension of the people who love the Danjiri Festival does not change!

From around noon, I will toss the town of Hirano-ku, Osaka, and when the area gets dark, the lanterns will light up and the sound of the festival drum will be louder.

Danjiri in each town has been remodeled 300 years ago and has been passed down to the present.

And I give the tension of the people of Osaka.

The performances are held in front of the large ”Torii” of the shrines and the loud clapping and screeching voices from the viewers. 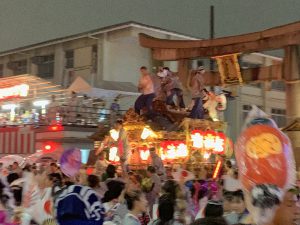 And, finally, when I went through the large ”Torii” gate, more cheers and applauses would occur.

And this year’s summer festival and climax of Osaka Hirano Kumata Shrine will also be the finale.

The rainy weather continued, and there were fewer people watching than usual, but the town in Hirano-ku, Osaka was hot and exciting. 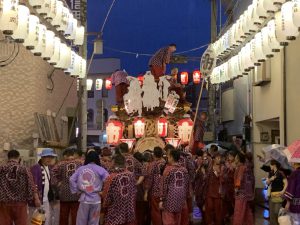 Until now, it was a foreign tourist who did not see so much at the summer festival of the shrine in Hirano‐Ku, Osaka City, but now it has come to be seen a little from this year.

If you come to Kansai / Osaka during this time, why not join the summer festival of Kumona Shrine in Hirano-ku, Osaka? ?