It will be an article post after a long time! From now on, I would like to deliver deeply enjoyable and useful information for foreigners to know the ”Kansai area” in Japan! !

Thank you in advance! !

Such bad weather continues, but in Hirano-ku, Osaka, “Kumata Shrine Summer Festival” will be held every year from 7/11 to 14 years.

The Danjiri Festival of “Kumata Shrine” is the largest in Osaka city, and about 300,000 people come to see it every year, and there are many people who see the magnificent Danjiri with alcohol in one hand, but it is also reflected in the photo. If you wear “Happi”, which is also the formal dress of the festival, you can also follow the streetcar of that town and participate! 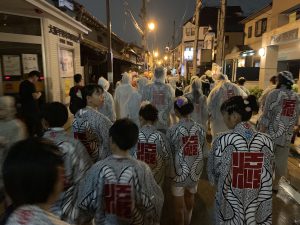 However, that “Happi” is only sold at a fixed place (hut that houses Danjiri) for a fixed period. Prices vary according to each town, but it is sold at around 10,000 yen, and you can participate in the festival every year if you purchase it once.

In the future, we would like to help you participate in “Kumata Shrine Summer Festival”. Surely, I think that foreigners can have an exciting experience that is not included in the guidebook! !

It will be the date of “Nine town joint towing”, the only opportunity for all Danjiri nines in the town to be on Osaka’s Nanko_ Street (closest station: Osaka Metro Tanimachi Line Hirano Station) from around 21:30 on December 12. Each dance competition will overwhelm visitors!

In addition, the sound of the festival’s drums in Danjiri makes the climax a climax. 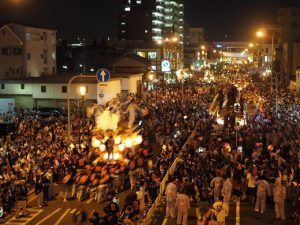 Along the road, you will be filled with people who can get drunk with a beer and a family with children.

And, on the 13th, there will be the largest show “Miyairi（Enter the palace）” of “Kumata Shrine Summer Festival”!

From around 19 o’clock to around 23 o’clock, the nine Danjiri of each town will be the climax of the festival that goes through the large ”Torii” gate of the whole shrine. I think that it will surely shock the people who visited! !

Well then, I’d like to deliver on 13th this morning at this place tomorrow.