Today, I introduce Japanese sake which is popular abroad recently.

Expanding from Osaka Station by JR Kobe Line from Nada Station 30 minutes by the sea, “Nada Gogo” is famous not only in Kansai but also in Japan all over Japan.

“Nada Gogo” consists of five areas, and about 30 famous brewery manufacturers that everyone knows are gathered.

There is also a sake storage maker with observation facilities among them, and it is a popular course of sake brewery tour.

Because this area is rich in fine rice and delicious water of Mt. Rokko, about 500 years ago, it prospered as an area with many sake brews of sake.

Kobe City Nada Ward and Higashi Nada Ward where concentration can be visited become especially popular places for sake brewing, but for a wide area other than that, we will introduce two courses and one day course for a half day course.

It is a course that goes around the old sake brewery “Sawa-No-Turu”  Entry Hall → “Kobe-shushinkan” (Fukujyu) → “Hakuturu” Crane Brewery Museum.

It is about 3 km long, so even those who are not good at walking should not be so painful.

There is also a taste that faithfully reproduces the old brewery.

There are many complicated processes in sake making and it is quite difficult to understand. Because Sasawa Crane Museum explains sake making in an easy to understand manner, anyone can understand sake making. Also, not only the panel but also the tools used at that time are exhibited abundantly.

Also, since there are video works, you can easily imagine the site of sake making.

After learning sake making, let’s extend to the museum shop.

In the museum shop, you can enjoy drinking as well as buying sake. Let’s try out various kinds of liquor easily without hesitation.

Inside, you can try “raw sake” which can be tasted only at the museum shop.

Various sake is sold at the museum shop. Not only a single item, but also a set of small sake. Surely you will find sake that is perfect for the situation at that time. There are also many kinds of appetizers and alcohol bowls, perfect for souvenirs! 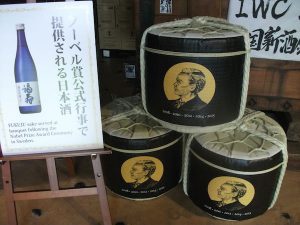 “Fukujyu” which is made at the “Kobe-Shushin-kan”. When the Japanese received the Nobel Prize, it became famous by “Fukusu junmai ginjo” was chosen as alcohol to be served at the dinner party.Sake may not be mass-produced because of sake made entirely by handmade, and it may be sold out. We have lots of things until early spring!

We introduce “Kobe-Shushin-kan” where you can enjoy Nada’s Sake all day, from sake tour to tenki sake and lunch wine lunch.

The tour of sake brewing in Fukuzu warehouse is a reservation system up to 2 days in advance. It is also possible to sample free tasting, drinking and compare Daiginjo tasting sake set (charged:500en) recommended.

There are three kinds of free tours, from A to C courses, but only the course B can be seen in the warehouse, B course which we can participate for free by reservation by phone two days in advance is recommended.

All courses will be tasting at the end!

Have the sake pour the plastic cup that I handed over.

Although I drink one by one, I will drink one after the other, so I can understand their individuality and characteristics very much, and I can find my favorite liquor. 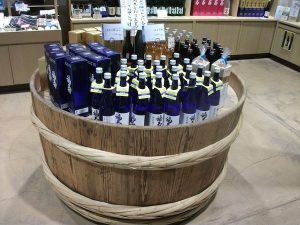 The pure rice ginjo of a beautiful blue bottle that was also acted at the dinner party at the Nobel Prize awards ceremony is easy to drink easily, it looks like wine.

It seems that it will be played in a wineglass at the dinner party, but it seems that the taste will change again when the vessel that puts drinks changes.

Of course there are sake that only people who came to “Kuramoto” can buy. “Raw Sake” that entered the barrel of the back is it. You can have a green bottle packed on the spot. Because sake does not burn, it keeps fermenting. It seems to be ideal to drink around 10 days after purchase.

If you like alcohol, I definitely will buy souvenirs and my own sake for my memories of Kansai again!

Going to the end of the half-day course is… 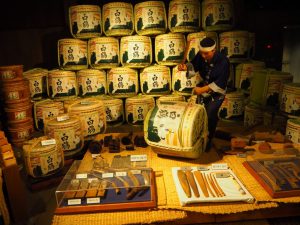 In the museum, we reproduce the process of sake brewing of old times with the tools and images actually used. Since you can see powerful work scenery using a life-size doll, you will soak in the mood of time trip to the scene at the time.

Again there is a free tasting section for the last fun!

Five kinds of liquor are prepared in all.

After this it is a taste to enjoy the difference of its taste by drinking the “Ginjyou-Sake”.

It is okay for the person in charge to properly explain each feature.

In the end you can also taste fruit liquor which you can enjoy even sake people who do not like sake such as yuzu and plum wine. 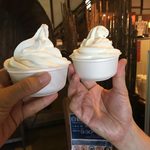 There is also a soft sake made from sake, and you can enjoy plenty of sake!

You can go around the three places above and enjoy a fulfilling half day. Each institution has a course of 30 minutes to 60 minutes separately for the tasting time.

Also, for foreigners, explanations in foreign languages are prepared, so I think that you can enjoy it without stress.

Why do not you try experiencing Japanese-style Sake from Kansai, which is also highly valued in foreign countries, in the bowl of the Kansai Nada, famous all over Japan.